It is always very stimulating when questions and answers in a Maths lesson suddenly go beyond all expectations.

This might sound like this is something that only happens exceptionally. Not so. In a class where a climate of questions and answers has been set in mutual trust, exceeding expectations happens almost every day.

In this post, I would like to show two such examples, one where my expectations as a teacher were exceeded, and another where a student improved his own conceptual understanding starting from a misconception – which was of great benefit to the whole class. 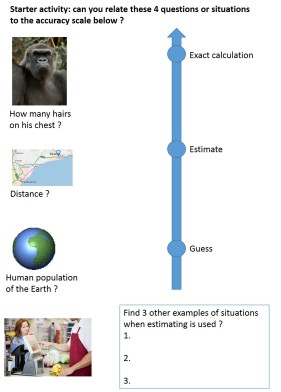 In the first example, I was working with students about estimating. The initial activity was intended to make them understand the difference between a guess, an estimate and an exact calculation.

Teacher: When you go to the supermarket and you’ve finished shopping, what do you do ?

Student: you go to the cashier.

Another student: Or you can self-checkout too !

Teacher: Right, but whether you go to a cashier or you self-checkout, what happens ?

Student: you scan what you buy.

Teacher: Well, what would you say if the employee at the cashier looked at your basket and told you: ‘I think it’s about 60 quid’ ?

Student: No, she wouldn’t do that, she’s scanning all the items.

Teacher: Right, and then ?

Student: Then you pay.

Teacher: What do you pay ?

Student: You pay the total amount.

Teacher: Right. Is the total amount an estimate or an exact total ?

Another student: Yes, sir, but… When you do your shopping and you’ve got £30 in your pocket, you make an estimate so you don’t overspend, right ?

This last question earned the student a reward. ‘Yes but, sir…’: I like that. By asking a question that went beyond the expected answer, this student was demonstrating he had understood exactly what an estimate is and how often you use estimating in real life.

‘Yes but, sir…’ are blessings in disguise.

In the second example (which took place during the first lesson of the year with a mixed ability set), we were starting to add fractions. The result of one of these additions was 7/4 .

Although this was clearly wrong and revealed a big gap in the student’s understanding of fractions, it was also the ideal trigger to correct misconceptions and improve conceptual understanding.

So I asked the one simple question: ‘What is a fraction ?’. Nobody knew, or at least nobody could tell. Within a few seconds, their understanding of fractions was totally changed when they realized that a fraction was, among other things, the division of one whole number by another whole number. Their conceptual understanding was then further extended with the idea of top-heavy fractions (thus called because the top is bigger than the bottom), relating top-heavy and other fractions to their decimal value, positioning positive fractions on a number line going from 0 to 1 and then from 1 to infinity.

The example is a very banal one, but that only shows even more clearly how a question revealing a misconception can lead to a leap in conceptual thinking.

These discussions are a key part of any Maths lesson. You can even start them in a systematic way by preparing hinge questions and throwing them in as a plenary before moving on to independent practice.