The most important event of the past week in the HE world has not hit the headlines. It hasn’t even been mentioned anywhere, as far as I know. Nevertheless, we should not underestimate its importance and broader significance.

Some universities have emailed their offer-holders with a ‘wherever you are’ message, whereby they are confirming that their campus will re-open in September AND that students will have the opportunity to start their degree online if they do not wish to (or are unable to) travel right away.

That is precisely the kind of action I hinted at in my previous posts, e.g. the feasibility of re-opening campuses at the beginning of the next academic year and the benefit of differentiated solutions that leave students the choice. Strangely, few universities have taken that step. Good for those who have, because by doing so they have filled the communication space left vacant by most institutions and gained a major competitive advantage in the admissions game that is about to unfold this summer.

Most importantly, what these universities have fully grasped is that, as far as next year’s admissions are concerned, this is no time to let someone else decide your future. In fact, the overall admissions perspective for the sector can be summarized in one sentence: the chips are down, so if you don’t call the shots it won’t come your way.

In this post, I will look at the dilemma some universities face on admissions for the next academic year. Even the word ‘dilemma’ might seem far-fetched, as many institutions feel they have very little choice but coping. However, further analysis shows that the current admissions situation can be approached at three possible levels: ‘plumbing’, strategy or integrative thinking. The ‘plumbing’ level concentrates on the most obvious tactic (entry tariffs). The strategic level goes beyond entry tariff tactics and looks at a range of possible strategies. The integrative approach embraces the limitations of the strategic level to engage with prospective students on an integrated vision of the learning ecosystem.

The ‘plumbing’ approach consists in treating the problem as a compensation game between international students and home students operated by a tap called entry tariffs.

We are all aware that, taking into account restrictions on travelling, recession, cluttered planning horizon, UK’s poor Covid-19 ranking in Europe, potential issues with qualifications and visas, etc. British universities are facing a deficit of international students. Even for EU students, the theoretical hope of one last year of home fees does not change the overall psychologically unfavourable context. For international students as a whole, there is the possibility of lowering usual standards on qualifications and language levels, but even that may not be enough. Therefore, the solution could come from additional home students, which means lowering entry tariffs.

Obvious, isn’t it ? But does it work for all institutions ? Not necessarily. In fact, the effectiveness of the ‘plumbing’ approach depends on the position of each institution compared to other universities, as shown in the following chart. 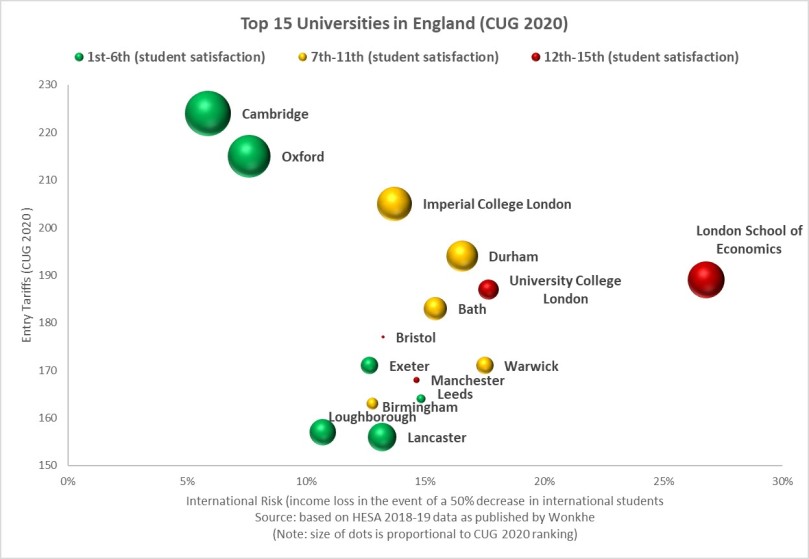 What the chart is saying

The position of a university on the horizontal axis represents how exposed and vulnerable it could be to a decrease in the number of international students. The further on the right-hand side of the chart, the higher the International Risk. For example, the most exposed institution of the group is LSE, whereas the least exposed are Cambridge and Oxford.

From an action perspective, the horizontal axis reflects the need to make up for a possible international shortage. For example, there is no urgent need for Cambridge and Oxford to lower standards (no surprise), whereas the more exposed LSE could be tempted to do so (which does not mean this is the only available strategy, as we will see).

The vertical axis reflects the possible implications of making up for the international deficit by lowering standards to attract more students, particularly home students. At the bottom of the chart, we see that Loughborough and Lancaster are already among the lowest entry tariffs of the top 15 (but rank highly on other metrics such as student satisfaction). For these institutions, there could be a greater danger to lower standards as this could impact negatively on their achievements and relegate them beyond the top 15, where rankings become both less attractive and more volatile. Of course, there is a bit of game theory involved: if everyone lowers tariffs, then there is a general downward move and rankings are not impacted too much. Nevertheless, as the behaviour of the competition is not so predictable, these are typically situations where lowering standards should not be the only strategy.

You may think this is not really the time to ponder over hypothetical rankings in distant league tables, and least of all over one single metric (entry tariffs), which is just one ingredient of their complex formula. Well, not only is it particularly relevant to think forward and look at possible implications on future league tables when considering scenarios involving international students (as it is notorious that league table rankings is one of the main decision factors for international students and their families); it is also a good idea to look at entry tariffs because this is one of the league table metrics that is understandable by everyone, even at a superficial level, unlike many other metrics (spend, value added, outcomes, etc.) which are either more complex or less in touch with the reality they are supposed to describe.

The existence of possible alternatives to the ‘plumbing’ approach is illustrated by the size and colour of the dots. The bigger the dot, the higher an institution is ranked, therefore the higher its reputation. Also, institutions with green dots have the best record in Student Satisfaction, which reflects their capacity to deliver on student experience.

I could have added other dimensions beyond that. These are all qualities that institutions can leverage beyond the mere entry tariff approach, building their own strategy to gain competitive advantage.

From this chart, it emerges that there isn’t one right strategy, because (1) all institutions are not exposed in the same way to a deficit in international students, (2) they already have different entry tariffs and (3) their record and power of attraction with students are different.

Which alternative/complementary strategies for which institutions ?

Beyond lowering entry standards for home students and/or international students, what are the options for institutions to attract more students in these difficult times ? Here are just a few:

You may have noticed that these are all communication strategies. Are we overlooking other dimensions of the marketing mix ? Yes and no. It’s just that, for one reason or another, other courses of action are not so straightforward. For example:

From strategy to integrative thinking

Are we saying that universities have a limited choice of strategies ? That may be so, but reality suggests a different and more relevant question: is this limitation a problem or a solution ?

Let me explain. I opened this post by referring to an event that actually happened. Not something that might happen. There is currently a lot of talk about the future of the HE sector. Fine, I understand that. What about focusing on the future of students instead ? Isn’t that where the real solutions are ? In other words, instead of wondering what the solutions may or may not be, isn’t it preferable to talk to those who are the solution ?

Emailing offer-holders to announce both the re-opening of campus AND the possibility to start online is a shining example of integrative thinking as explored in Roger Martin’s remarkable book The Opposable Mind. – which is Martin’s term for the human brain’s ability “to hold two conflicting ideas in constructive tension”, a process through which decision-makers can synthesize “new and superior ideas”. In our example, the constructive tension proceeds from an understanding of the current state of mind of offer-holders.

Let’s face it: prospective students are one of the major hostage groups of the crisis. Nobody has ever seen the scientific evidence for shutting down schools. We are not sure it actually exists. For all we know, the main reason for closing schools was because they were facing staff shortages with the Covid-19 crisis. Even then, it would have made sense to keep schools open just for students in exam years, wouldn’t it ? And not to cancel the only gatherings that operate with social distancing even in normal times: exams. But that didn’t happen.

So, here’s the elephant in the room: offer-holders are not only prospective students, they are young people who have been sacrificed. And they know it. Now they are waiting, wondering what will happen next. That is their state of mind. It doesn’t take much finesse to see that failing to communicate to them in such a situation is a major psychological mistake.

Will prospective students turn to anyone who reaches out to them with a positive and confident message on the next academic year ? Well, why wouldn’t they ? At last, someone is talking to them about their future. They are young people: their future is their life, not Covid-19.

Right now, everything around them is in a ‘no future’ mood. They are not only under lockdown, they are also mentally and emotionally immersed in the wider dimension of the lockdown: the world has frozen itself. Young people want a future, they don’t want a frozen world.

Therefore, institutions that occupy this communication space are not only delivering a message of hope, they are positioning themselves as the source of hope. If you are the VOICE of the future, you ARE the future. This operates at two levels: the rational level (the message) and the symbolic level (the source of the message). More than ever, the future belongs to those who will proactively consult, understand and communicate with students.

In making this point, I am looping back to the conclusion of my first post: student experience begins NOW.

In previous posts, I have written about the general coronavirus crisis and its implications on the HE situation. Why ? Because I feel everyone has a right to understand what is going on and deserves clarity. The feedback I have received in the past few weeks (including, in one particular instance, resulting action taken by an institution) suggests they have reached their goal.

In this last post, I have focused on the HE situation only. As far as the coronavirus situation is concerned, I have nothing to add on the statistical front and will happily defer to two experts who are infinitely more knowledgeable, clear-minded and useful than I will ever be. The first item is an article by Katherine Xue, postdoctoral fellow in microbiome evolution at Stanford University. The second is a video interview of Sarah Gilbert, Vaccinologist at Oxford University, on the Andrew Marr Show. The first explains the complex inner workings of this specific viral epidemic, while the second provides a first-hand perspective on the successive steps of vaccine research. Highly recommended.